The last of the 117 NOVENCO tunnel jet fans was officially installed in the end of November last year, thus completing 4 of the 5 stages of construction of the Gaasperdammertunnel. The project is part of the road expansion between Schiphol, Amsterdam and Almere.
During a planning phase of the A9 Gaasperdammerweg, the ambition was to install the last fan within this stage, even before all concrete had hardened. This succeeded, and NOVENCO played their part in this success. The work is not finished yet. The other 22 NOVENCO fans for the last, 5th stage of the Gaasperdammertunnel are going to be installed right after the ceiling constructions of the reversible lane are in place.
The Gaasperdammertunnel is 3 kilometres long and not only the longest land tunnel in the Netherlands, but with its 5 tubes also one of the widest tunnels in the Netherlands.
It is planned to be open for traffic in 2020. In 2021 a large park will be built on the tunnel roof. NOVENCO has already started the countdown for the first traffic to pass through the tunnel. 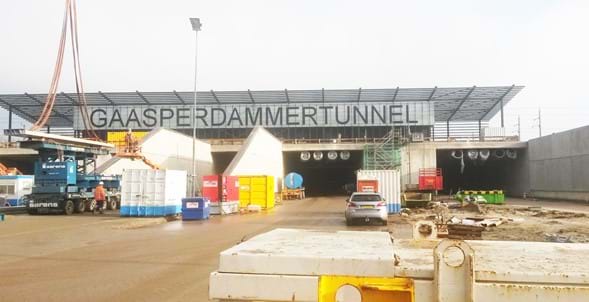